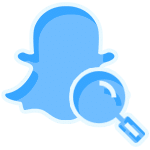 Is the Cape of SnapChat being a Bit of a Hassle? Keep an Eye on It

ThOneSpy monitoring software for Snapchat allows a user to view all the Snapchat events, conversations which are captured through the target phone. With TheOneSpy Snapchat Spy, SnapChat messenger tracker you can Spy on SnapChat Messages.

Why Do You need to Spy on Snapchat Social Networking App?

First, there was Facebook that took the world by storm. It was followed by Twitter and then sooner before later there came Instagram which grabbed people’s attention from the moment that it was launched. Then came SnapChat, and the world went crazy. There was no shortage of social media networks on the internet that didn’t have a counterpart in the mobile application, yet the world has never seen something quite like SnapChat. It allowed people to share pictures and short videos with their friends and family. It allowed them to make the videos even funnier with the addition of filters and stickers and whatnot and these messages also had the capability to self-destruct in a few minutes.

It was things like these that made SnapChat so famous amongst teenagers and adults alike. Yet it was not something that any concerned individual could rest easy knowing that their child, their spouse or their employee was using a portal that could distribute messages that had the ability to self-destruct eventually.

How to Spy on Snapchat Messages with TOS Snapchat Monitoring?

TheOneSpy Snapchat monitoring app is one of the most reliable software that you may be able to find on the cyberspace that can provide you with everything that you need to know when it comes to the SnapChat account of the person of your interest.

While you may also be able to look through the target device physically, but more often than not, with SnapChat spy app, you might not really be able to find anything incriminating or the very thing that you are looking for since the messages that are being sent and received self-destruct after a few minutes.

Thus, in such situations TOS Snapchat Monitoring App is quite helpful since it can:

It is through such means that you might be able to not only see Snapchat hack what your child, your partner or your employee is doing on SnapChat but also with secret Snapchat spy learn what is going on in their life and everything else that you may want to know with just one click.

Snapchat instant messaging app seems as social media app, but in reality it is known for online dating app for teens and tweens. It has fascinated youngsters over the years to use Snapchat in terms of messaging, conversations, sharing of media files, and last but not the least audio and video conversations. Apart from hookups and snapchat dating, teens reportedly got bullied, stalked and body shamed. Parents can protect teens from all these concerns using Snapchat tracking app to get the logs of all the activities kids and teens have performed. Moreover, they can record Snapchat on teen’s phone using live screen recording app.

Snapchat stories, conversations and chats usually wiped out and mostly snapchat user want to read their favorite and crucial conversations on Snapchat social media app. So, individuals who want to get their conversations backs and other important activities due to some odd reasons they can perform surveillance on Snapchat messenger running on the target phone using Snapchat surveillance software. It empowers user to get the logs of all the activities. User can use Snapchat monitoring spyware control panel to get all the data to see the activities they have done.

Employers can spy on social messaging apps activities of employees within the working hours to prevent time wasting on company’s owned devices. Snapchat social media app is one of the most popular messengers these days and everyone loves to use it for stories, conversations and audio video conversations and stuff like that. So, employers can use tracking app for Snapchat to get the logs of the activities with complete time stamp to make employees accountable.