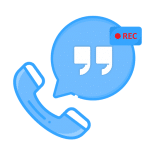 Google hangout is an instant messenger. It enables the user to send and receive text messages, share media files, and make voice calls. People over the years were able to track logs of the social messaging app, but when it comes to IM’s call recording, it was almost impossible. Now TheOneSpy presents a call recorder for Google Hangouts to listen and record Hangout VoIP calls remotely & secretly. The application is fully compatible with Android OS version 10 and above devices and can work with rooted and non-rooted smartphones.

There are plenty of activities in terms of chats, voice, and video calls on the Hangout instant messaging app people used to perform. Cellphone monitoring software lets you unveil the logs of the social messaging app previously. Now it has come up with the unique and exclusive tool that could stun the people known as IM’s VOIP calls recording software empowers you to record voice calls on the contemporary and updated version of Android cellphone devices. Moreover, the best part of it, you don’t require to root the target mobile. You can do this on non-rooted devices.

Furthermore, it allows you to record and listen to the voice calls incoming and outgoing calls on instant messaging app and you can upload the recorded calls data on TOS online control panel.

How to use Google Hangout Voice Call Recording Software on Android without Root?

You need to get your hands TheOneSpy cell phone spy software. Therefore, you need to visit its official webpage and get the license alongside the passcode and ID. Now get the possession of the android device and start the installation process and done with it successfully. Use credentials and get access to the online web portal where you can activate instant messenger VOIP call recording app. You can use it on the target device and record live voice calls to the fullest.

Who Wants to Record IM’s VOIP calls of Google Hangouts?

It is difficult to say who want to do surveillance on someone’s mobile installed social messaging app likewise hangout. However, people associated with the law enforcement agencies always look into suspicious personalities. Moreover, businesses where social messaging apps commonly used in a working environment on companies owned tablets and cellphones. In addition to that, many other organizations whether government or private and many individual people and communities desperately looking forward to record and listen to the VOIP Calls performed on Google based instant messaging app using TheOneSpy cell phone tracking app.

Instant messaging apps these days are commonly used on mobile devices and Google’s social media app is not a new thing. It is widely popular among everyone and young children are second to none. So, they used to spend their time on social networking app features in terms of text messaging, voice, and video calls. Therefore, parents used to set parental control on teen’s mobile phone installed social media apps to track messaging, chat, and VOIP calls. So, parents are scared of children encounters with online predators, such as bullies online, stalkers, and sex offenders. Moreover, teens are getting involved in sexual hookups and dating online and plenty of teens are addicted to being intimate with strangers by making voice calls. Moreover, teens make late-night IM’s calls on a hangout with strangers. So, Hangout calls recorder software to record live calls on android without rooting the device.

The businesses worldwide have been transformed digitally and employers have provided digital mobiles and tablet devices to their employees in working hours. Employees over the years used to install Google based instant messenger on their device to do chat, voice, and video calls with each other. So, the corporate sector in the majority of cases loves to use instant messaging apps to have free communication with each other. However, employers have to keep eyes and ears open to get the logs of social networking app running on business-owned Android devices. So, business owners can get the logs of social media app running on employees’ devices and further record VOIP calls on the Google hangout by using cell phone monitoring software.

An individual can use cellphone surveillance software on the target android device to get their hands on the logs of social messaging apps likewise, messages, social media calls, and video calls. Previously, you can get the logs of messages and chats conversations, but now you can record IM’s voice calls using a hangout call recording app on Android without rooting the device. Moreover, you can record and listen to both sides of the voice calls and upload the data to the web portal.