With acceptability of social media, the popularity of dating apps has grown at an alarming rate. What to talk about kids, even the adults are not safe on these dating apps like Grinder, Tender, Kik Messenger and Down. As the use of smartphones has increased, the number of apps for entertainment, killing time and social interaction has hyped as well. Nowadays, millions of people are using dating and hookup apps that not only engaged them in useless activities but also impact them. The current statistics revealed shocking facts about the effects of these ostensible hook-up apps. The crimes associated with these dating apps have grown sevenfold in last two years. Rape, grooming, sextortion, and attempted murders are on the peak when it comes to dangers and impacts of such apps.

People only need a source to have fun, communication, and gossips with anonymous people, strangers or those living in their surroundings. A number apps support finding the users in a particular area and teens can’t wait anymore when they happen to meet a peer. They share pictures, have conversations, fix date time and venue and remain unaware of the post-meeting impacts. They might be kidnapped, raped, harassed, bullied or used for any unlawful activity. Here are few pernicious dating apps for teens and parents got to keep vigilance on the apps list of their kids so that they could be held at arms’ length from getting addicted of these.

It’s a gay-dating social media app that inspires the gays to visit, sign up and find out other male gays out there. It has changed lives of many in meeting their desired people from relationship perspectives. The app uses fake IDs and location to let the users enjoy for the time they want. Though it proves handy in getting the male gays, meet and date them, often the results are not that much good from a safety angle. Teens become more prone to the extremist people like murderers, hikers, cyber bullies and sex abusers. It was not later than early of 2016 when a user of Grinder went to meet his partner for date and was spiked. He was tortured, and even they tried to kill him. When the adult men are not safe from this app how the kids and teens can be even, they have no defense mechanism or powerful enough to protect themselves.

Some facts about crimes on Grinder are as follows:

Likewise other social networking forums, Vine is a short-video sharing app that has gained massive popularity among the masses. Now it’s serving millions of users who create their accounts and share their funny, motivation, entertaining and sexual videos. As the app is widely used by teens and kids, so it’s leading to kids-exploitation. All parents are not familiar with most of the social media apps they are non-tech savvy. The adverse effects of Vine appear in the form of severe damages to teens, sexual abuse, exposure to fraudulent people and bullies.

Tinder is a heterosexual version of Grinder. This online dating app has taken over the social media world and attracting thousands of users to become members for meeting their desired peers. This hookup app is location based and supports when it comes to discovering mutually interested partners. The users who are interested in each other share photos, enjoy a chat and decide for their dates. Like so many other dating apps, Tinder facilitates communication, but it has emerged as the most dangerous app for teens and kids. This actually uses Facebook profiles and the people can contact with their friends and friend of their friends, so exposure to being trapped is optimum. The hookups through Tinder ultimately led to a sex offense, grooming, rapes, killing and sexual exploitation.

The use of such apps by teens and kids is not suitable at all, and even the worse factor is their parents are not aware of what they do on these online apps. Parents should monitor the online browsing histories, a list of installed apps and other social media activities too.

The list of dangerous dating apps will open the eyes of many parents. Though few parents manage somehow to keep a check and balance on their kids, their daily activities and schedule but most are ignorant at all. They can keep themselves updated and informed of various social media activities of their children. TheOneSpy software is a very useful app designed to monitor activities, check calls, instant messengers list, trace the location and more specifically see a list of installed apps, helps remove and pause them remotely on a device on which it’s installed. Having a spy app like TheOneSpy is the luckiest opportunity for parents to maintain safety and ensure monitoring of their teens and small kids. 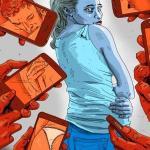