Filming self-intimacy scenes with your partner through the cell phone, same as doing sex without protection! In case of theft, loss and getting the cell phone into wrong hands may ruin you and your partner’s life. Videos may go viral and you will not have the place to hide your face. Self-pornography is a dangerous act and people are putting their private life into wrong hands.

The technology has been advanced over a decade and the modern invention in the shape of cell phone gadgets are popular among the peoples no time ever before.

Everyone has their smartphones in order to make a call, text messages, sharing media files, and taking photos and videos are common activities these days. People are using the cell phones for several different reasons and making semi-nude photos and videos is also gaining popularity and sharping into a modern trend.

Young teens make their photos and videos of different locations and share it on the social media websites and even on the social networking apps.

On another hand there are plenty of couples who used to of filming their lovemaking scenes by using the cell phone device rear and front camera for a fun or for a memory may be! But this sort of stupidity often ruins their life when they make videos and then forget to delete it and then lost, theft and by getting a phone into wrong hands.

Reluctantly, video may go viral and they will not have the place to hide their face. Self-obscenity is putting adults and teens living at risk and they don’t realize that self-pornography through mobile phone camera is as un-safe as doing sex without protection.

This year, the victims of the viral video that has had been caught in a sexual act stated to the TVM that the video had gone viral when they had given their cell phone for repair. The video was stolen by the person, who repaired their mobile phone device, the man and women who were in the video were in a relationship when they filmed themselves by using their mobile phone device and till date, they are still in the relationship.

The self-obscenity based video shows that the women wearing her uniform doing oral sex with his partner in Suzuki car. Jeremy Camlellie victim’s representatives said that the video was stolen from the cell phone repairing company’s employee for wrong and malicious motives and then the couple has gone to the police.

On the other hand, the police inspector Sandara Camille stated that the person who involves in such type of activity such as sharing photos and videos having sexually explicit material of someone without having their consent would be fined up to €5,000.

The culprit could also be in prison for at least two years.  The incident of viral video in Malta has made the rounds on electronic media and as well as on social media. The content of the video showed that Malta post employee in uniform doing oral sex with the female employee in the car.

There were jokes and memes made by the viewers have already surface in huge numbers and there are plenty of people who had objected to the revelation of video on the web.

There are plenty of incidents happened every single year where couples had sex and after that due to some reasons video go viral over the internet. The celebrities who had faced such embarrassment are Kim Kardashian, Paris Hilton, Jennifer Lopez, Minka Kelly, Farrah Abraham, Eve, Colin Farrel and Kendra Wilkinson.

In a majority of the cases, a video had made through the cell phone while doing intimacy with the partners and due to some particular reasons, the sex tape goes viral and the victims have to face real embarrassment.

When these big names are not able to secure their privacies, then what would happen to the ordinary couples who are involved in self-obscenity. There are thousands of cases happen each year in which couples shoot their sex life on cell phone camera and the videos go viral over the social media. On another hand, most of the videos leaked online due to personal grudges between the couples when they broke up with the relationship they share their sexually explicit videos and photos to humiliate and embarrass their ex-girlfriend or boyfriend.

These kinds of nightmares may happen with every young couple, so there is need to play safely; keep your cell phone off!

Young generation especially teenagers are committing this offense very often, and don’t understand that it will be serious consequences after spreading such videos and photos on the social media without the person consent, she added.

How can you prevent yourself to be a victim?

You can protect yourself by using the modern technology apps and software that will enable you to wipe out all the data when you have lost the device or someone has theft it by using the cell phone monitoring software.

The mobile phone tracking app enables a user to wipe out all the data remotely on your device. But initially when you have made your mind to film such a sexual material, make sure to install the smartphone spy app on your mobile phone device and after that, if you have lost your cell phone, you can remotely delete all the data within your phone remotely.

It will enable you to prevent yourself and your partner to be humiliated and from real embarrassment, in case you have filmed loving making videos on phone and you have lost the cell phone suddenly.  Having the mobile phone spy software, put your worries to rest and remotely delete such material from your the lost phone they can put you and your partner in the huge problem. Once you have deleted the entire data, a user can retrieve its private data from data swipe app software online control panel.

The mobile phone monitoring spyware is the best tool for the people who are in a relationship and for parents who found their teens into such activities that ruin their lives. Having the spy app for cell phones installed on your partner device, he/she will be able to post your sex-tape on the web, to get porn revenge when you broke up. Parents can also keep an eye on their teens if they have such videos and photos in their phone if someone has their phone no one will be able to blackmail them and no one will be to humiliate them, because mobile phone surveillance app enables parents to wipe out the sexual material from their teen’s phone remotely. Parents can also get prior information if teens are going to do such activity with their boyfriend by using the MIC bug of the cell phone tracking program. It enables parents to listen and record the surrounding voices and conversations.

On another hand, parents can record short videos of the surroundings, meanwhile record whatsapp, viber, imo and spy on IM apps through spyvidcam by using the back and front camera of the target cell phone device. Parents can also view the screen activities of teen’s phone by using the live screen recording of the monitoring software for phones and get to know what they really do on the cell phones. Parents can remotely get access to the teen’s device by using the keylogger.

It empowers teens to view all the keystrokes applied on the phone such as messenger keystrokes, password keystrokes, SMS keystrokes and email keystrokes. Having such type of access to teens phone parents can view the gallery and can see what sort of videos and photos they have captured.

Use cell phone spy app to protect your privacy and play safely; keep your cell phone off while intimating with your partner. 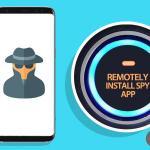 Can You Install Spy Software on a Cell Phone Remotely?